IBRAF webinar discussed the scenario, challenges and trends for international trade in the post-pandemic

The Brazil Africa Institute (IBRAF) brought together experts to discuss the economic scenario in the pandemic period and possible solutions to face the problem in the future. The dialogue took place in the webinar “International Trade: Challenges and Actions after the Pandemic”, broadcasted on IBRAF’s YouTube channel last Thursday (June 11) 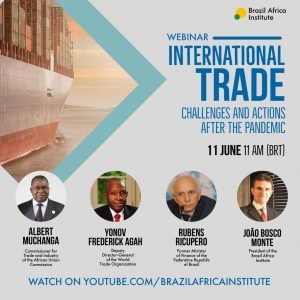 The meeting was attended by Albert Muchanga, African Union Commissioner for Trade and Industry; Yonov Frederick Agah, Deputy Director-General of the World Trade Organization (WTO); and Rubens Ricupero, Former Minister of Finance of Brazil. The dialogue was moderated by João Bosco Monte, President of the Instituto Brasil África.

For Albert Muchanga, the pandemic is already severely affecting economies around the world. With closed borders and a slower market, many sectors and countries face problems in addition to health. For him, an important step in overcoming the crisis and preparing for the future is in strengthening domestic markets.

“Africa’s post-COVID-19 future depends to a large extent on the African Free Trade Area. It is an opportunity to make small markets a big market. The continent has more than 1 billion inhabitants, numbers similar to those of China and India,” the said.

Yonov Frederick Agah also sees the economic future after the pandemic with great concern. Using as a basis the analysis made by the WTO in April, which pointed to a decline between 13% and 32% in international trade, he stated that: “If it is 13%, it will be greater than the 2008 crisis. 30%, will be the largest since the Great Depression, in 1929”.

For him, it is important that governments are “market-friendly”, that is, that they are able to have partnerships with private sector organizations. “No country will grow if its policy framework changes every 10 years,” he said.

Rubens Ricupero pointed out that “some sectors will be particularly affected even after the pandemic, such as airlines, hotels and, mainly, tourism in general will suffer a lot”.

According to him, however, the pandemic also has a tendency for the emergence of production chains that are, in fact, global and that there is room for negotiation in this regard. Ricupero recalls that many countries have suffered from import difficulties and that, in the future, they seek to move to a stage of less dependence, but managed cautiously.

Professor João Bosco Monte highlighted the role that international cooperation and knowledge transfer play in the social development of a country. He recalled the case of Brazil, which over the past decades has moved from being an importer to an exporter of agricultural commodities, a case that may serve as a model for the development of agriculture in Africa.