Water use in agriculture is crucial for food security: the sector accounts for 70% of all water withdrawals in the world. For each kilo of meat, about 15 thousand liters of water are needed, where much of it is used to feed the animals, and in crops of soybean, corn, etc.

Ending hunger, achieving food security, improving nutrition and promoting sustainable agriculture are some of the 17 goals for transforming the world, according to the 2030 Agenda proposed by the United Nations (UN). Therefore, creating new processes to improve results and deliveries in agriculture and livestock, preserving the environment and water resources, will be the challenge of this sector. 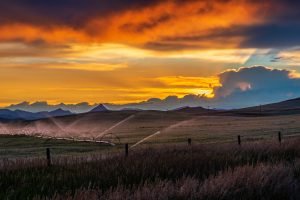 World food production reached in 2018, in grains alone, a volume of 2.5 billion tons. And according to FAO – Food and Agriculture Organization, the total number of what is produced in all sectors of the food chain is expected to increase by 80% by 2050, when the population will exceed 9.5 billion. of people.

The implementation of new techniques has also allowed significant changes in the fight against waste and conscious use. Night irrigation is already practiced on many properties so that there is no evaporation of water flowing into the sun, construction of rainwater catchment tanks, replacement of continuous flow hoses with controlled flow hoses and leak detection programs.

Given this scenario, some actions are already being taken to help the rural producer to reduce water consumption in their routines. With research in biotechnology, crop harvests are already being less and less impacted by weather and climate variations, not suffering from drought, for example.

And to give more weight to the debate, Rethinking Water Use For Enhanced Prosperity will be one of the themes presented during the Brazil Africa Forum 2019, which will take place in São Paulo, between November 12 and 13.