The Brazil Africa Institute signed, last week, a memorandum of understanding with Atepa Group, one of the references in the field of infrastructure on the African continent. In Dakar, Senegal, Professor João Bosco Monte, president of IBRAF, met with Pierre Goudiaby Atepa, chairman of the Group, to sign the MoU. 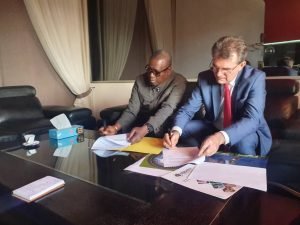 At the meeting, the two representatives discussed cooperation projects and Brazilian actions on the African continent. One of these actions will be in the Kitoko project, which is underway in the Democratic Republic of the Congo, and is aimed at creating a “smart city”.

In addition, Pierre Goudiaby Atepa is also one of the confirmed participants at the Brazil Africa Forum 2020, which has Natural Resources as the central theme of the event. Negotiations are also underway for officials from the Democratic Republic of the Congo to be present at the Forum.

With the partnership, IBRAF continues to extend its operations on the African continent, as well as enabling the strengthening of cooperation ties between the two regions.