The president of the Brazil Africa Institute, João Bosco Monte, was at the Fundación Puertos de Las Palmas, in the Canary Islands, Spain, where he met with local officials for strategic meetings on business opportunities for Brazilian, African and Canary companies. Las Palmas Port is considered as one of the most strategic in terms of logistics for the African market.

There, IBRAF’s president participated in meetings with key representatives of the Port and learn about services that can be offered to Brazilian companies with an interest in expanding trade relations with the African market using the structure as a hub. 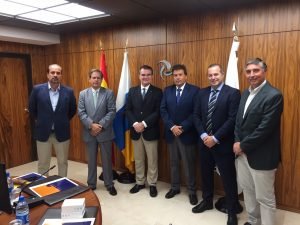 At the occasion, representatives of the Fundación Puertos de Las Palmas also confirmed their participation in the Brazil Africa Forum 2019 which will take place between November 12 and 13 in São Paulo and has food security as its main theme. Brazil and the African continent.

“We are happy to participate in this year’s Forum. Given that the Port is located at a strategic point for Brazil, Africa and Europe, the discussions at the event can serve as the basis for successful partnerships,” says Luis Ibarra Betancort, president of the Portuaria de Las Palmas Authority.

“I was excited to have the opportunity to learn more about the Las Palmas Port. I saw their structure and the relevance with which they treat a rising market like the African. The projects they develop are synergistic with those of IBRAF, so it can be a fruitful approach to international business, ”explains João Bosco Monte.