Disruptive technologies of the Fourth Industrial Revolution are already impacting agriculture. From using blockchain technologies for traceability of animal protein to applying drones to map and seed the land, those technologies can increase farmers productivity and yields as well as provide safer and fresher products to the final consumer. 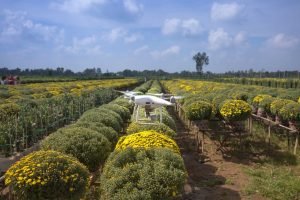 Agriculture 4.0 is supported by four pillars: data-based management, production from new tools, sustainability and professionalization. In addition, there is a convergence between digital, hardware and biotechnology that, together, promote human-centered benefits. And it is precisely this set of integrated technologies that are creating a true revolution in the field.

Brazil is one of the main countries in the scenario of Agriculture 4.0. In recent years, agritechs have been emerging and, through them, new solutions are launched. “Brazil showed the world that it can produce food. If we look at 40 years ago, our country was a food importer and today is one of the major global producers of commodities and services,” says the president of the Brazil Africa Institute, João Bosco Monte.

Agricultural 4.0 techniques have been working on important decision-making processes, such as pest control, better times for new harvests, minimization of climate risk, and even financial and cash flow control, and loss monitoring.

With such importance, agriculture 4.0 will be one of the themes to be discussed during the Brazil Africa Forum 2019, which will take place in São Paulo, from November 12 to 13. The debate will focus on how Agriculture 4.0 can favor agricultural production, bringing opportunities for Brazil and the African continent.

“Technology is of great importance, we have shown that some practices from Brazil can be brought to Africa. Among the 54 of that continent, several of them have characteristics, such as soil and climate, very similar to Brazil. Thus, this creates the opportunity for Brazil to present itself as a technology provider, as an example,” argues João Bosco Monte.